So it’s bad news on the old decrepit LCA knee front, I’ve sprained my MCL ligament. But then again, it’s not terrible news because I haven’t torn it which I did about 3 years ago and consequently never ran the 2012 Robin Hood Half Marathon (RHHM). 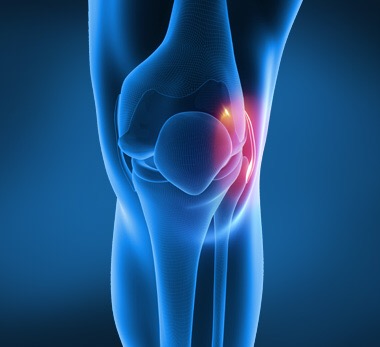 There it is, little shit of a ligament !

Difference is that in 2012 I was a much less experienced runner and I never even entered the half that year. I must have just laid off running and at some point started running again, I really can’t remember much about it. I just remember it was my first ever visit to a Physio ( quite sexy guy, that bit was memorable) and it was my first ever experience of taping…… Up until that point I do remember the only time I’d ever seen tape before was on a volleyball players buttock at the London Olympics ! Now you’re virtually not a real runner unless something is taped on the start line.

So naturally I’m not just adopting a common sense approach of “if it hurts, don’t do it” that’s what a normal person would do, I’m a runner, first thought is always….. 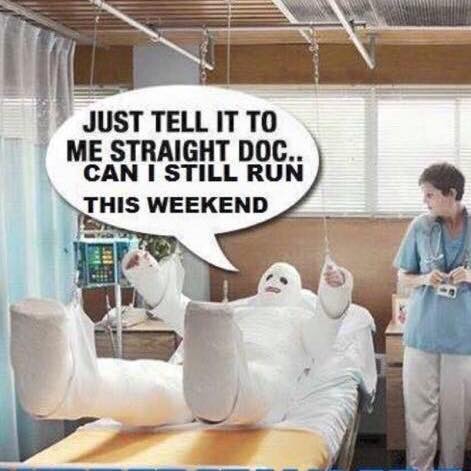 Foolishly the new physio, a runner too, didn’t say no to running either. But then my opening gambit along the lines of “I’m running this race so get me to the start and over the finish” perhaps suggested stopping me might be futile. It’s age, I’m getting more pig headed. In my 8th year of running I’ve never entered anything that I them haven’t been able to run and I’ve never needed to defer anything. I can’t not run it, it feels like the slippery slope if I give in.

My personal deal (before making the final, final run or not decision) was a successful 8 miles this weekend just gone and 11 miles next weekend and if I can do them both, I’m running the RHHM. Stage 1 is done, I ran 9 miles on Saturday. It took a steady 1 hour 30 mins bang on, so it wasn’t quick, but I kept plodding on. For the first mile, every left foot strike is painful but it seems to settle down after that mile. Except it doesn’t settle down , the physio assures me it adrenaline blocking my pain receptors. Worse still though was the physio session after my run where she decided to loosen the ligament either side of my knee which involved sticking both thumbs in until I had tears in my eyes and has left me with such bruises that they are far more painful today than any previous knee pain…..and I paid for that ?

So can Ellie and I notch up 11 /12 miles this coming Saturday before tapering? Currently yes. We’ll probably do Big Track as its flat. My knee pain is worse on hills so let’s not even mention the first part of the RHHM course. I can’t bear to let Ellie down, I know she wants to run with me but I won’t be leading her to a sub 2 which was the original plan. I can’t bear to let myself down.

My secret weapon is my frozen peas. Ice packs are no good, they don’t mould to any body part gently freezing every nook and cranny in the way peas do. Every night I get my peas out with my cuppa. Not just any peas, they’re Waitrose peas, this is the posh end of town don’t you know. I’ve been doing this every night since I got back from my hols. That bag of peas has been frozen and thawed on my hot knee more times than Nottingham ice rink. I’ve warned the family …… NEVER eat the peas.

I’ve promised myself a month off running if I actually do get to the start line, I really need to let this injury settle down. But not just yet. If I really couldn’t run I don’t know what I’d do ! 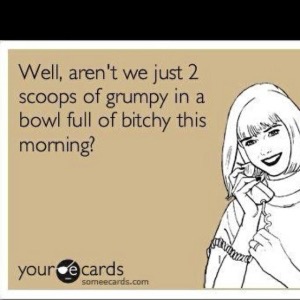