It’s fast becoming a national treasure, its founders have been recognised by ‘Her Maj’ for their rather clever brainwave, over 700,000 of us across the nation are registered ‘weekend warriors’ hitting parks up and down the UK. The concept has been discussed on prime time TV and was even featured in my Sunday paper last week. I could procrastinate no longer, Park Run, I’m signing up!

Nothing to it, easy and free, why had it taken me so long ? Bar codes generated, just a quick whiz through the laminator and I was good to go. Colwick Park is not my nearest Park Run, but then it’s not very far away either. It has water, I love running by water and it’s where I’ve previously helped some of the beginners from Notts Women Runners (NWR) and it’s where NWR often run, so why not. This Saturday was an NWR graduation, lovely ladies who together completed C25K and celebrated with an official Park Run. Sadly post marathon and family commitments I haven’t helped with the latest groups which is a shame as I love it. But there was still going to be lots of faces I know from the group.

Of course my real reason for conveniently forgetting about Park Run is all about that irrational fear of 5km I raised a couple of blogs ago. Why risk a heart attack every Saturday morning? Getting out of bed is not my issue! I actually think the recent HPP Lakeside handicap got me over it. Their palpable shock that I had no Park Run time was noted, clearly it’s a runners essential. I’ll never get quicker if I don’t try a competitive 5km now and again and it’s been pointed out that I need to be chased to be quick!

Fired up, I was doing it, I was ridiculously nervous about it, I ignored the weather forecasts. I woke up excited and bloody hell was it raining. It had been for hours. Any sane person would have got back in bed but I’d done the ultimate……I’d told people I was doing it! I never wuss out, I never back down…..saying it is doing it!

Finding the start was a whole new ball game. I parked near the beautiful Colwick Hall ( got married there!) and didn’t know which of the many paths into the woods to take? I had a plan, I waited for running gear. Ha ha, a chap hopped out a car and headed for the woods. I was out and after him…..what else would a lone lady do but follow a complete stranger into lonely woodland in the pouring rain and strike up conversation. He was indeed Park Running but alas had never done one before….the blind leading the blind ! We wandered for ages before we found another runner…..who had never been to Colwick Park either and time was ticking. Finally we saw the adventure centre towers and a a sea of purple (the NWR ladies) and I spied a fellow HPP runner gladly not in a club vest.

What to wear? Didn’t think it was an HPP club vest event and I’m conscious of being too slow to wear it most of the time anyway. I don’t have an NWR vest as my ‘ secondary club’ , but I found a purple T shirt which I then promptly covered up with a black rain protector!! The number of first timers was huge and can you believe 211 runners rocked up on such a totally horrific day….how many run when the sun shines ? The briefing seemed easy, the volunteers lovely….all sounded straightforward.

We were off through the puddles. I started edging round them but once you’ve hit one full on and got over that ‘eeeewwww’ moment when all the water goes in your trainers, you’re just good to splosh. A guy near me was leaping over the puddles like a gazelle….I had enough breath to compliment his ballet like leaping although what I was actually thinking was that’s a guaranteed way to injure yourself !

I tried to run at threshold ( no chatting but not dying ) sadly, not knowing the course is hard when you’re not sure when and if to make a break. I stuck with a lady in pale blue, just on her shoulder in fact. I was conscious of being one of those heavy breathers that drive you crazy when you run near them….it puts me off breathing myself ! She seemed about the right pace though. The NWR supporters shouted me on despite the fact I was disguising my purple top. I finally saw the bend that was mentioned in the briefing …..the guy said it was 150m from that point, so sprint if you could. I decided at that point that the lady in blue ‘was mine’. How bad do I sound, this is not a competitive event, it’s about challenging yourself in a local park…..my arse. I huffed and puffed and raced ahead at that bend. I heard NWR cheering…..and boom pain over.

Token grasped, scan complete, await results……how very simple. My HPP pal pointed out the PB bell which as a Park Run first timer, I could ring.

Time to ring that bell

I went back to join the gradually swelling numbers of NWR supporters as the new ladies began coming in. I didn’t think the extra after effects of my first Park Run would be a sore throat from shouting so much. There was high emotion, it’s humbling for experienced runners to realise what an achievement a 5km is when you’ve never run a step before. It’s lovely to see such strong group support for ladies who without that support I doubt would don Lycra and hit the streets. They’re all now runners, not all whippet thin, not with abs of steel, not likely to worry the event record holders (yet), but they’re still runners.

I needed directions out of the park to find my car, it will be fine next time though ( note that, next time). I was muddy, my trainers were muddy, I was worried my uber clean husband might not let me in without a hose down!

Then the best bit…..stats. OMG the official email is a total geek fest, I need that every time I run. I could trawl through it and filter columns forever. The results, well for a first one it was OK, officially 25.23 (Mr. Garmin said 25.10) , 8th lady over the line and 3rd in my age group. Not as fast as my one and only 5km time from last year (24.22) but the conditions must have played a part.

I haven’t seen any photo evidence of me in action. I hid in the NWR group shot as I wasn’t in purple. 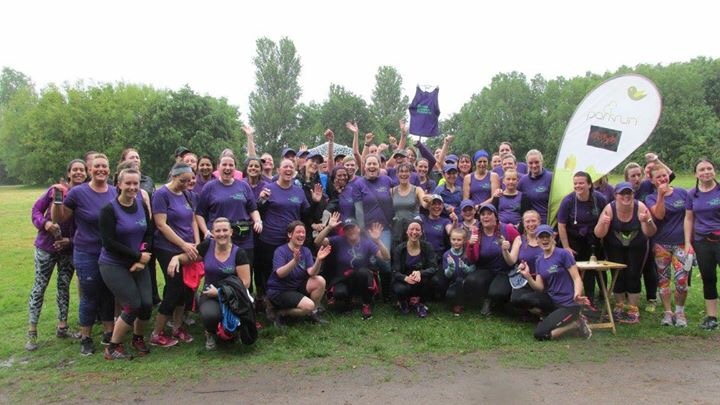 The NWR Graduation has given this Park Run ‘purple rain’ as a title (I’m there, but you’ll never see me!)

I’m in the know now,  I have experienced Park Run, I have a time to beat, I am a weekend warrior, I know what to do ……so will I be back. Hell yes……..I could have gone quicker !