Home › Ladies of a Certain Age Running (LCA) › Oh no, missed one ….and I’m over it, girlfriend!

Oh no, missed one ….and I’m over it, girlfriend!

Week 6 was a good one despite the fact that for the first time I skipped a run in the training programme and ran 3 times instead of the planned 4. I’m usually so OCD that something like that would devastate me, a real failing, not on the level of commitment I strive for. But surprisingly unlike me, I actually just thought that quite frankly I’ve got so much going on right now, I had such an awesome run last weekend and most of the weekly training runs so far that I have done have been a bit longer than stated, I just thought that I’ve more than made for the overall minutes of running required so far.
I finally, as they say, am not ‘sweating the small stuff’ ….. I now feel the need to add ‘girlfriend’ somewhere into that statement.

I must try this mantra more often

Two runs in a week with Ellie are always a joy, we managed a Monday night recovery run after Sunday’s epic speedy 10km and then a 10 mile long Sunday run where I pretty much moaned for the whole route.

I made Ellie one of my epic post run smoothies to make up for the moaning: 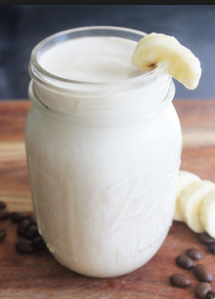 There’s no doubt that emotional baggage weighs heavy and running helps offload a lot. Starting off with the baggage though doesn’t make for a good run. Every one of the ten miles felt harder work than it should have been. I also managed a solo tempo run which was no problem. As for the additionally required 30 min speed session…..oops life took over that one (Refer to above image).

I must admit the media is very running negative right now, what did we do wrong? Last week we had to read that running a lot and being a couch potato are equally bad for your health and today, just when I was thinking (and so do many of my running buds) that I could run off the current stress excess, I read this …

So this week I can now see the clear path ahead of mileage ramping up, 10 miles was fine, I know I can do it and we meet the half marathon mark very soon which I also know I can quite happily conquer; but it always seems arduous…how can I ever go beyond it? That’s going to be a mental hurdle and I suspect a huge relief when I  do it (when not if of course). I can almost image the thrill of 15 miles. Time for self belief as well as relaxing the OCD.
No Sunday run with the beginners today, it’s cheer mom duty for me and the first time both daughters are competing in two cheer teams. I bought hubby a ticket for the first time in two seasons of cheer. I’ve facilitated both cheer seasons with my eldest daughter and now both daughters are competing so why shouldn’t he come along and share the ordeal.
The 3 mins of each routine, yes just 3 mins that they perform is totally awesome. So too is watching the other teams in the same group just to see what they’re up against. But the 6 or so hours of hanging about trying to find a quiet corner of an indoor arena full of teenagers and nightclub loud music is mind blowing. I am the worst cheer mom ever, I avoid all the politics, nights out, certainly don’t wear a cheer mom tee shirt ( that’s well off LCA territory) , hate the noise and lighting in the main arena and find the fake tan, red lipstick all rather unnecessary for the younger ones.
Still my girls are passionate about it and when they’re performing I’ll whoop and holla with the best of them. The level of dance , stunts and gymnastics is amazing, never a Pom Pom in sight. I just wish it wasn’t called cheerleading as the UK audience only has one impression of a cheerleader and it really doesn’t do the sport justice. It has no status here as it does in the US they and they compete for one of the UKs best teams (EMCA) .Still it’s on the rise, every uni now has a cheer team, who’d have thought it ! A second and third placing made the very long day worthwhile.

So week 7 is going need some willpower and juggling…..mum’s surgery, half term holidays, visit to friends, oh yes and running, at some point ! I am up to the challenge.