I’m continuing my year of firsts, different races and event, something new for the mojo so a trail race seemed and exciting idea. I’ve been prepared since I purchased some sexy looking Asics trail shoes in the January sales. I even drummed up the support of Ellie and Susie for a bit of off road action as we entered the Beacon Hill Solstice Run to give us something sunny to look forward to in the murky depths of winter. The summer solstice we thought, the countryside in beautiful June we thought, a glorious introduction to trail running we thought, a cheeky Friday evening countryside trot we thought, we thought wrong! Those who know me or my blog know that I don’t do mud, don’t like getting my trainers mucky, so grassy slopes in June sounded idyllic. Not only that, but organised by ‘Jack Rabbit Events’ there’s always the added lure of an epic medal.

As we almost missed the entrance the car park the rain was so heavy the visibility was almost zero. We bleakly followed the poor marshals huddled by the gate in their emergency rain ponchos and found a great spot in the field near the start and finish points as we were rather early. Despite being only 35 minutes from where we live, I’d never heard of and certainly never been to Beacon Hill which is near to Loughborough in Leicestershire so we’d been generous allowing extra drive time. All wasn’t lost, the three of sat in the car nattering, steaming it up as the rain passed over and things brightened up ……a smidge. It might not have been raining but it was humid, no way I was running in a jacket.

It was a soggy plod to the tent to get our numbers but the mood brightened as we saw more familiar faces of the ‘purple army’ arriving. There were ladies with flower garlands around their heads in homage to the sunny solstice….would there be naked dancing around the beacon we panicked ?

It was a cani-cross race too, not something we’d encountered before. Dogs of all shapes and sizes were being harnessed to runners. We saw a lady pass us pulled by a large Doberman ….’she’s got a PB in the bag’ we thought. Do dogs look like their owners ? It’s a good place to test the theory.

We braved the loo queue, not too bad and big thumbs up go to Loughborough council, there was loads of loo roll, hand towel and warm water in a public loo block. Positively luxurious compared to the usual facilities for a pre run piddle.

The dogs had a 5 minute head start, there was so much yapping and woofing on the start line as they all lined up I was waiting for the words ‘mush’ to be shouted but off they went barking into the distance.

The first mile was straight up hill to the Beacon and I mean ‘up hill’ the first part wooded and wet as newly created streams ran down from what has actually been a week of heavy rain. Runners were walking within 100 yrds of the start, come on folks, give it a go. There was a bit of poor runner etiquette as these walkers didn’t make much of an effort to move to the side of the path so the braking through was tough. Sadly it was mainly groups of ladies talking and walking right across the path ( I bet you’d swim up a lane yakking in the same way too !)

Despite the earlier murk, the view from the rocky outcrop at the top was spectacular, worth the arduous climb that put my officially lazy, middle aged glutes to the test. Mile 2 started in spectacular downhill fashion. I’m not used to that kind of speed of descent, I had to trust in the trail shoes to hold firm on the wet path. That mile bordered on mild middle aged panic that falling over is just not an option once you’re past 30, to the toddler like pleasure of hurtling down hill, almost out of control legs moving without effort. The difference in those mile splits, a 10.5 minute mile, followed by a 7.3 minute mile. WWWWWWeeeeeeee !!

Mile 3 undulated beautifully through the Charnwood forest and by this point we’d caught up with many cani-cross runners for some it seemed like a Friday evening dog walk as the dogs sniffed the soggy vegetation and frolicked in the newly made puddles. Mile 4 looked steady but contained yet another deceptive final climb. One of those hills where at the bottom you think you can see the top but when you get there it bloody goes up again and then turns sharply right and goes up even more! No wonder at the bottom a runner next to me said ‘I hate this hill’ when at that point I was thinking it didn’t look too bad.

And on to the final mile, another hurtle downhill this time buoyed with the added enthusiasm of knowing the finish was within reach. Descending back into woodland the newly sprung streams across the path stopped no one as we splashed enthusiastically through them keeping a firm eye on the floor for tree routes and stones. There was a near catastrophe point as marshals desperately shouted ‘Right turn’ towards the finish and it was a sharp right, now very muddy and wet. The marshals at that point needed danger money seeing runners flying downhill straight at them.

I belted to the finish ….. 44.54, happy with that as it was my first (and I don’t think last ) trail run and proved to be some tough going for my old lady legs. Awesome medal received and a bottle of beer in the goody bag. I stuck to the water and the chocolate biscuit though as I waited to shout in Ellie and Susie and assorted purple vests. They came in at 52, Ellie’s first race since foot surgery in December and what a race!

There was beer at the finish, now that’s a goody bag ! 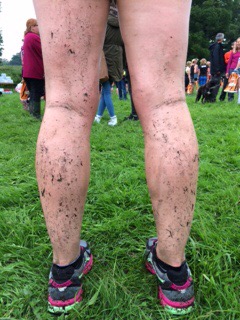 …and I don’t do mud. These are new trail shoes OMG

Will we be back next year? Hell yes and we’ll hope for better weather and we’ll be bringing a picnic. No trail fail for this LCA.