So sitting on the sofa feeling dull, ( OK too hungover to run for a bus let alone attempt one of this mornings New Years Day park runs), looking back at the highs and lows of 2015 seems a good idea before setting some new challenges for 2016.

Thanks to Mr.Garmin a year in stats is easy to gather. Bizarrely on paper, 2015 is scarily similar to 2014. I ran 147 times covering 754 miles, just 23 miles more than 2014 and I burned 101,491 calories which is actually 507 less than 2014. I’ve ended the year a half stone ( actually more) heavier than last year and I do need to shift that extra poundage so clearly I need to bust a few more calories. You can definitely tell when you’re not eating and drinking right, it directly impacts your performance.

But the stats on paper don’t really bring my running year to life, they actually leave me feeling a bit flat about the year when it actually felt really different to previous years. I know I shouldn’t compare, but I like to see what fellow runners are up to. So many fellow runners achieved 2015 miles in 2015 and some are planning 2016 miles for 2016. Now I look at my own stats, I realise what an achievement that actually is, 2015 miles is ‘going some’ as they say. Makes my 754 miles seem a bit low now I’ve added it up.

But my year wasn’t dull, I’ve had some great moments….

I ran the Virgin Money London Marathon and raised £2,400 for CLIC Sargent for children with cancer. OMG I need to repeat that for my own benefit…..I ran the London Marathon. I actually conquered my first 26.2 miles and it was a most amazing experience, an atmosphere like no other, memories that will never fade. I ran in a race that Paula Radcliffe ran in and I ran the race quicker than Chris Evans. It wasn’t a fast time,  but it was a first marathon attempt and at some point I know I’ll attempt another marathon. I know I can do it.

At the other distance extreme, I discovered Park Run and conquered my fear of the 5km. My crazy nemesis that in my brain says I can’t go fast and shouldn’t push too hard.

Paced by some great runners, I’ve increased my speed at 10km, my favourite distance and been helped along by ‘frival’ runners. 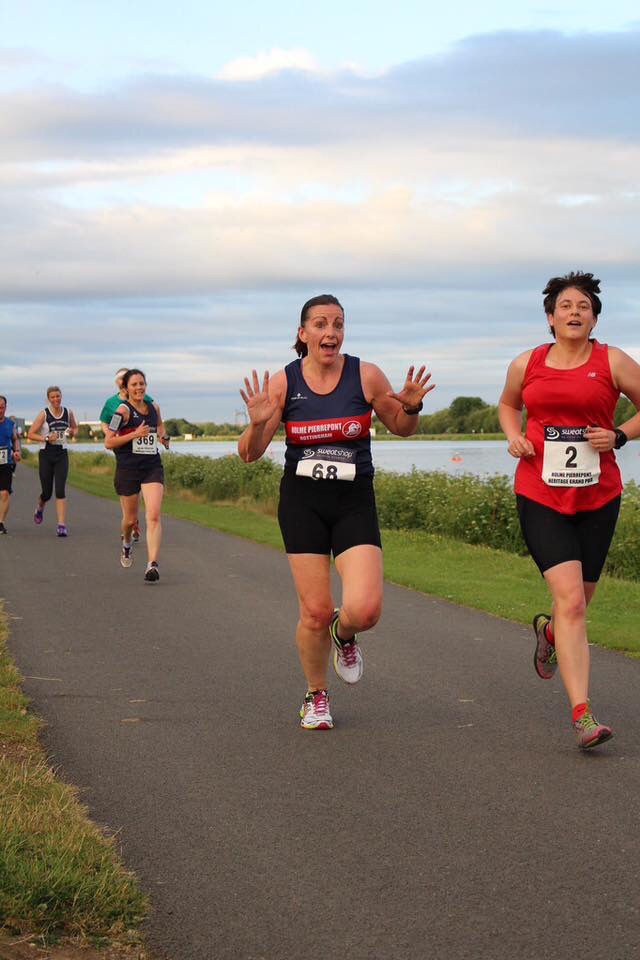 I helped my lovely running buddy Ellie get a sub 2 hour half marathon before she had to have foot surgery and in doing so I got a cracking time myself into the bargain.

So in summary, I’ve PBd at every distance this year

I became a Leader in Running Fitness and although unable to commit to running my own group, I’ve enjoyed encouraging some of the NWR beginners and improvers throughout the year. Hearing what some beginners from January 2014 have gone on to do in just one year is incredible.

Most importantly, 2015 highlighted that your running life is the best coping mechanism for the highs and lows of your daily life and one has an impact on the other. One can turn the other around. The start of the year saw my sister in law complete her breast cancer treatment and my lovely mum start her long breast cancer treatment journey that took most of this year. Being so up close and personal to the chemo process is quite a hard place to be, especially when you see the impact it has. It’s not easy to support and work and not impact your own family. Running has to fit in where it doesn’t upset anyone and no one accuses you of putting it in their time slot!

So 2016 starts with ‘wellness’ and long may that continue. What goals can I set that don’t set me up to fail ?

So Saturday tomorrow, alcohol washed from the system, still feel like pig fattened for market but let’s get the show on the road and let’s do park run.

2016 has begun, whatever it brings, forward is the only direction.