At some point I’m going to realise that my life is full enough and I’m not going to take on further challenges any time soon. But then I realised there was a ‘Leadership in Running Fitness Course’ LIRF taking place at the home of British elite sporting education and more importantly on my doorstep at Loughborough University. I tried months ago to do this course when it passed through Notingham but it was full. After Loughborough it was heading off round the country until the end of the year. It was just too tempting, I booked a place.

I just fancied it really, another string to the old bow, liked the idea of actually being licensed to bore all and sundry to death about running. I love helping newbies to run when I get a chance so let’s make it official. A quick email to Holme Pierrepont running club to check they were OK with me doing it (it’s not like I anticipated any issue, why would there be really) but their approval makes the course cheaper as I’m affiliated to them.

With my packed lunch and my kit at the ready I was off for an 8.45 start. Indeed, 24 LIRF hopefuls squeezed into a slightly odd shaped room at the Sportpark building which was easy to find and free to park, so all in all, a good start. Apart from a guy next to me from Loughborough, I was lucky with just a 25 minute drive. The other attendees were from Skegness, the West Midlands and even Wales. Now that’s some effort for a course.

What to wear. A dilemma indeed. It said running kit as we would be active but then amusingly said if we were injured and couldn’t participate to ‘dress for coaching’ now that intruiged me. What could that mean? I envisaged a shell suit, an item I haven’t owned since the 90s, or what about velour joggers? Too WAG? Or is it slacks and a blazer which I think I might be confusing with martial arts referees from my old competing days!

Perfectly able to partcipate, I opted for my London Marathon finishers tee shirt. I haven’t worn it since the day after the marathon, I’ve never found the right opportunity. Would it be too pretentious? I guess I was trying to qualify my place with a ‘look I can run’ statement. Not only that, but I unleashed my new running shoes, got to break them in somewhere and it seemed a suitable occasion to let them loose. This time I shall keep my horrid black ones that I have endured for months as a muddy back up. They’ll be ready for one of Ellie’s off-road spectaculars ! These beauties joined me on the course… 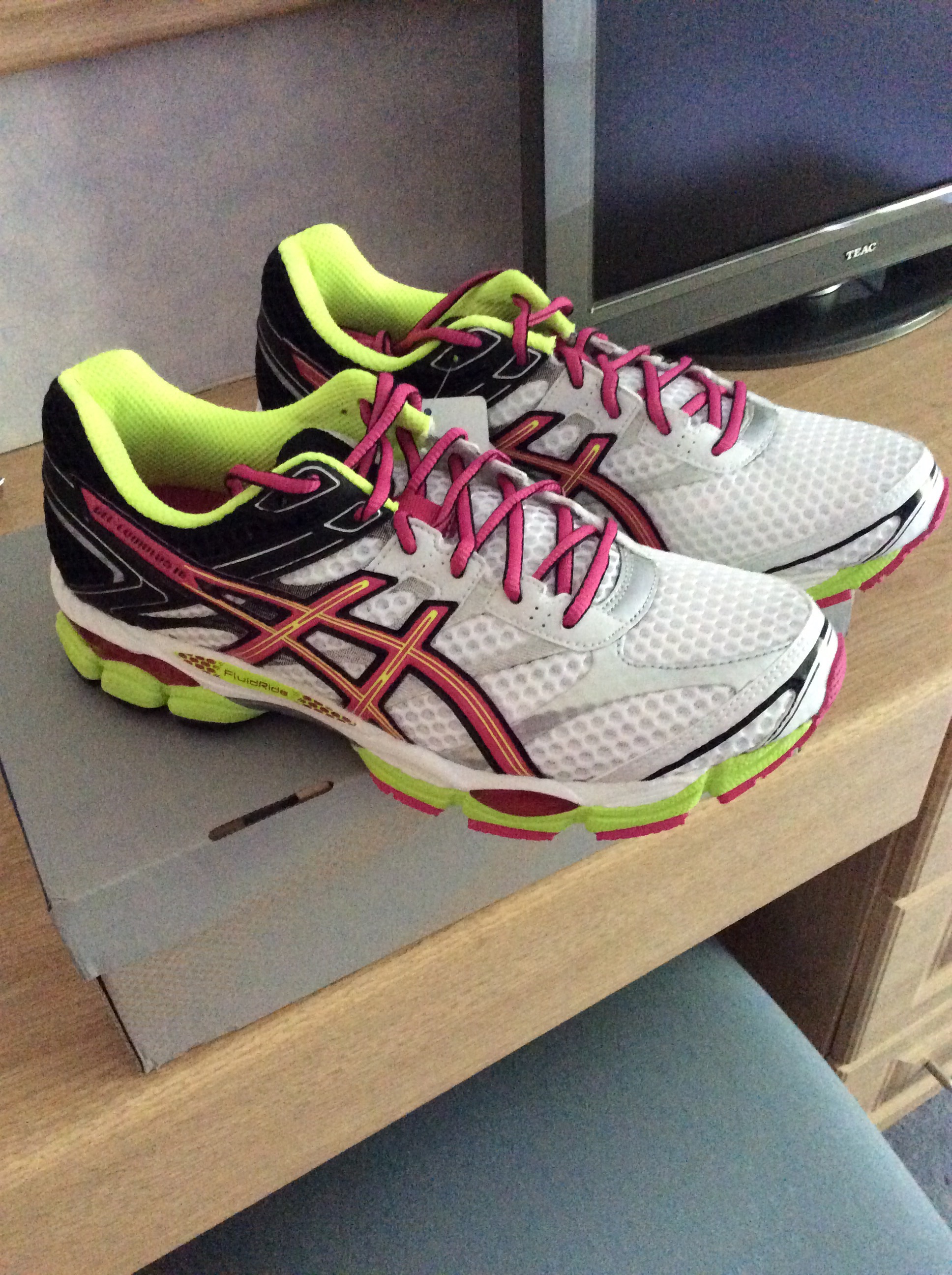 A good day to break out the new boys

The tee shirt fortunately wasn’t too out of place, there were Snowdonia Marathon, Wolfrunner and assorted club tee shirts. The really intimidating statement was the RAF guy in his RAF triathlon gear who turned out to be an Ironman devotee……now that’s a lead you’d struggle to follow.

Enthusiastic coaches Chris and Amy delivered the course, a mixture of PowerPoint and practicals. Fortunately more of the practicals. I couldn’t face ‘death by PowerPoint’ on a Saturday, I see enough of that in the week. There were 9 sections to the day covering all sorts of topics including risk assessments, warming up, cooling down, stretching, common injuries, barriers to running and running session structure.

We were blessed with a beautiful day which as we spent around 3 hours of it on a grassed area and car park outside, was great. We worked in groups both delivering and receiving warm up, stretching and cool down sessions. We actually ran far more than I anticipated, I felt knackered by the end of the day. There was clearly a difference in delivery ability though, I’m not sure everyone could a hold a group confidently by themselves.

There were huge differences in running experience which surprised me. From people running years like me, to a guy who has just finished couch to 5km, just thinking about 10km and a lady running a few months. I genuinely question if that’s enough to register as a run leader with an England Athletics website? Helping a group might be great, but setting one up ? I thought the guy sat next to me was quiet until I finally established he was Belgian and not so confident with his English. Was he planning to lead a Begian group ? Still he was quite sexy so I’d happily follow him for a few miles! But the mix of ages and background just shows how running brings people together with a shared passion and it’s that passion we all want to share.

Throughout the day, I ran circles around the grassy area, I varied my pace round a marked triangle, I sprinted across the car park and wove in an out of a line of trees. I ran backwards across Tarmac, skipped round a traffic island, reacquainted myself with ‘spotty dogs’ and I was sooooooooo tempted to put a ‘Miranda gallop’ in seeing as I fancy leading a ladies group!

I’ve left awaiting a ‘license to lead’ once the DRB checks are done, a formality I’m sure. But what do I do with it ? Right now, nothing.

Mum’s chemotherapy treatment has been torrid and session 4 has wiped her out. My dad has simply struggled to cope and in your 80s its all a bit much. I’ve never seen my mum unable to get up and hug her grandchildren. She’s struggled to eat anything which just doesn’t help. So we’re undecided whether there’s more chemo to come or if we’re moving to radiotherapy, the journey isn’t over. I know they missed my Saturday visit, I’ve tried to go when I can. So the course was a slightly selfish pleasure but I loved it.

I have been asked to help with Holme Pierrepont’s beginners and at some point I’d be happy to. I have joyously helped with Notts Women Runners beginners although I’m not affiliated. I could just go it alone and run a group  independently and filter them to other groups as they progress.  I’d like to help ladies without a doubt, I’d like to help real ‘I can’t run’ beginners, I’m keen to know whether selecting a group on age (the LCA runners) or even size would be wanted, does that a break a barrier down to help more ladies run? …….comments on those thoughts are much appreciated.

Run Activators look for people to give talks about running……bloody hell that’s up my street. Speaking is a speciality.

I have the string on my bow, I need a plan to pull it, but when my life is calmer. So it’s goodbye from the newest ‘Leader in Running Fitness’ on the block.