The Ashby 20, haunting me for weeks is now behind me and so are 20 gruelling miles that I’ve ‘banked’ …. If you can run Ashby, you can run London and for once I actually believe I can, but I’m under no illusions that it won’t be a tough challenge, still did I really think it would ever be easy ?

Waking up to a beautiful spring day was a good start, so too was not having to travel alone, find the car park alone, the start line alone, it makes things all a bit daunting. A friend Sue, more a friend of Varsha’s who I’ve met on social outings and gradually realised we have a running connection was a last minute entry. Sue has only ever gone 16 miles and me 17 so we seemed a good pairing. After the shared ordeal, reckon we’re best mates now. We acquired another passenger the day before from Notts Women Runners (NWR) the camaraderie of the Facebook group is great, why let someone else travel alone who lives down the road? You know you’ll have something to talk about so we were a happy trio buzzing with excitement in the car.

Parking at Ashby school was easy and well signed, finding the leisure centre a bit more tricky as we followed a couple of other runners down the road onto the High Street to then realise they had vanished. Ironically we turned round to see half a dozen other runners following us! Oops, a quick nip through an alleyway got us to the right spot. A quick queue for the loos ( always time for a ‘micro wee’ ……..the one where you don’t want to go but feel you should before the start)

The mood in Ashby park was buoyant and cheery and who wouldn’t be on such a lovely day. The plan, run with Sue but split if required. I didn’t want to injure myself before London and I have upped to this distance quite quickly so I was thinking 10 minute miles would be fine. Sara, our running blind date started with us too. Sue and I were shocked when Sara admitted she hadn’t run much since October and only done 5 miles pre this event…..she left us at mile 3 !! ……… That’s rather like those people who do no revision for exams until the night before, then get an A when you’ve been revising for months and scrape over the line of a B! How do you do that without injury and no fitness build up? Guess some people just got it!

Naturally we a started ahead of pace at 9.3 for a couple of miles and then settled at 9.5, seemed nice and easy. The first mile out of Ashby was downhill and easy, so I tried not to therefore think about the same mile ( the last mile) back into Ashby ! Then we reached the loop, the event is really two 10 mile loops around country roads. It was like a longer version of the Turkey Trot that I did in December, country road, desirable village, country road, desirable village!!

Organised by Ivanhoe Runners, it was well organised, lots of marshals, lots of water, gels, chocolate and jelly babies on offer. I had my own gels, and was trying 3 for the first time ready for London. Last time I lost one out my belt so having not bought a new, more secure belt, I carried one for the first 5 miles and shoved the other 2 under my bra straps! Now whilst they were secure, I realised that the corners of the packets were a bit sharp and clearly whilst on the trot and performing their little figure 8 dance that the magazines tell me they do, my poor boobs were stabbed mercilessly ( lesson 1 learned ). They were very warm too, eeewwww……

I had a few jelly baby grabs just for a change, you could spot the real jelly baby fans as there were a lot of running legs with white powdery bottoms where people wiped their sticky jelly baby hands.

Bless the race photographers, the only snap of me and Sue feeling relaxed and happy on lap 1 and I look like an Oompa Loompa……

Sue and I were good until into the second lap. We weren’t lapped by the winners which was a possibility so I actually felt better about that ! We were however overtaken by Ian the gorilla at mile 8. He is apparently a famous fixture of the event being and Ivanhoe runner. We got to the half marathon mark at 2.10, I was pleased with that though, as for me it meant better pacing for the distance. The loop was strange, it was like an Escher drawing, it seemed to just go up but never really come down. Beyond mile 15 some of the hills were tiring and seemed endless. By mile 17 I did what actually everyone around was doing, walking the last part of the hill . I’ve never walked at any point in any race I’ve ever entered so this was a new experience. As all others were doing the same, it made it feel slightly less of a fail but it’s not what I’m used to. It’s a tactic at distance I know, it’s how ultras are done, but it’s a new concept to me and I didn’t like how it felt.

I met so many VLM hopefuls, it was great, we were all saying the same ‘if I can do this, I can do London’ ! Nice to see some NWR runners too. Funny how you can recognise someone from Facebook and totally think that you know them ! An odd boost came at mile 18 when a voice behind said I had a great ass in Lycra and that’s what kept him going in races……what do you say ( at my age I should probably be grateful!) and I didn’t have the energy to deck him. I kept stoically pushing onwards.

It was a relief to turn back to Ashby and that last mile uphill that I knew was coming, there was lots of support though. A final walk before resuming pace and turning down the lane to the finish. It was longer than I thought and one of those double finishes where you cross a chip point and then another and you’re not sure which to stop your Garmin on.

Despite being in agony, my run to the finish looks quite good…… 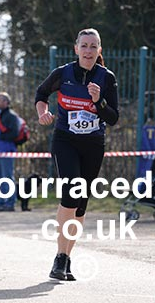 I’m not sure how I felt about it, I had estimated 3.30 and come in at 3.27. But the walking thing hugely disappointed me, will I run / walk the last miles of London? Sue was just a little behind me, there were 25 HPP runners on the day and me and Sue were last in, we didn’t even make the HPP team shot, so for me it felt a bit of a failure. I sent them a post race selfie of me and Sue, hope we’re still worthy of the vests!

We did it….these LCAs can

I set myself high standards and I am hard on myself. Sue and I have never run 20 miles before, I should be chuffed, someone tell me to be chuffed. And then of course there’s the post race stats to analyse. 880 out 1051 and 83 out of 109 vet 45 ladies …..not my finest performance. I wish I could just run for the personal achievement of reaching 20 miles which I would have said was impossible when I turned 40.

My legs felt ceased up like never before! I collected my legendary hoody……grey this year (ugh), only one shade of it too! It was a nice goody bag, cheese cob, banana, cereal bar, biscuit and I was handed a spot prize from sponsor, Aldi………£5! Better than a smack in the mush, as they say. I don’t really know Aldi, I presume I can do my weekly shop with that ? 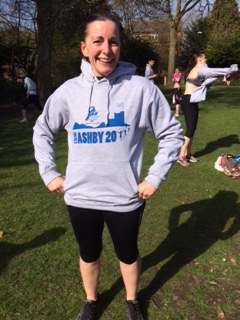 One shade of grey hoodie

My pressing concern immediately after, how am I going to drive home ! I tried not to pass on that genuine concern to be travelling buddies although I had to apologise for rather sloppy clutch control in the queue on the main road out of Ashby.

Bath, PJs,roast dinners and a glass of red……perfect recovery. Now the dilemma. London  is 35 days away, do I need another 20miler, or will Ashby do me?