As the old adage goes, ‘be careful what you wish for’ and guess what? I’m running the Virgin London Marathon 2015.

I’m blogging about it now but I’ve known for a few weeks. I was so desperate to run it, I couldn’t risk the ballot, I applied and got a charity place. I’ve dreamed about it, I imagine myself feeling giddy with nerves trapped amongst throngs of runners ( yes the ‘rabble’ as I clearly controversially called them in my last post) in Greenwich park waiting for the off. I’ve seen it so many times from the helicopter view of the TV coverage whilst I sit on my comfy sofa with my fresh coffee and pain au chocolate. I imagine the crowds cheering the whole of the route and I see myself turning down The Mall to the finish, exhausted and tearful, I feel tearful even thinking about it. That’s what I do, I set myself a goal and sometimes no matter how crazy I’ll do anything to make it happen. When they do, it wouldn’t be the first time I’ve thought ‘oh shit what have I got myself into now’ ,but usually with a large dose of courage the experiences are amazing and life enhancing.

I recall fulfilling a lifetime ambition, age 40, standing on a small airfield in the Cotswolds on a beautiful summer day while both my parents and young children sat nearby having a picnic as I waited for a little bi-plane to land. I’ve never felt so sick as it landed and a lady climbed down off the wings. Me next as I clambered on and was strapped on top. It took merely seconds as we raced down the runway and took off for the panic to go and the absolute exhilaration to take over as I wing walked, waving to people sat outside at a pub below and waving to my family having the picnic. Trust me, waving is really bloody hard with the wind speeds up there! I never wanted it to end and the fact that the pilot didn’t do the loop the loop was actually disappointing. 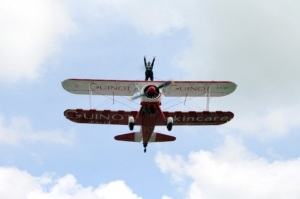 I’m asked a lot how I can top that when I’m 50…..trust me I’m working on it. Shark diving? Bungee jumping? something will come to me.

But what about the in between years, why wait for a new experience once a decade? It was shortly after this photo that I took up running. I just thought a new decade needed a new sport. It took over a year to dare to enter a ‘race’ and I did the Rushcliffe 10km. The thought of such a distance seemed insane and now that’s just my normal weekend run and my time since that first one at 1.02 has gone down to 50.22 .I’ve just done my third half marathon at a PB of 1.54 and deep down I’ve known for a while that I’ve come so far, I have to give a marathon a go. When I started, I always said ‘absolutely never’ to a marathon, it was beyond what the human body is designed for, dangerous, only for crazy folk. But now, surrounded by runners, everyone’s done one, often several and they’re just normal keen running enthusiasts, not elites, not Kenyan’s and mostly, not young !! This LCA needs a piece of that action, I need to tell my grandchildren and no doubt in years to come bore everyone in the old peoples home that will listen, that I ran a marathon.

Now I’m under no illusions, it may genuinely be the stupidest idea I have had to date. I work full time in a full on job, I have two teenagers and I am their taxi and number one support crew and training for an April marathon will take me through the worst of what winter might throw at us this year. On the other hand it could be the amazing start of a worldwide marathon career that brings new meaning to destination running. The New York, Boston or Berlin marathons, wow, imagine that.

But just in case, it’s the former, then the one marathon needs to be an iconic one, the Robin Hood just seems too ordinary and encompasses all my training routes, where’s the novelty in that ? So London it is and I’m proud to run it for CLIC Sargent, the childrens’ cancer charity, who helped my lovely niece a few years ago when she was diagnosed with lymphoma age 15, just before her GCSEs.

I guess I really need to start worrying about both the training and the fundraising nearer Christmas, but as I’ve just done the half marathon, I might as well keep my distance up at that level and I’ve set up the important Just Giving Page so my husband, despite his lukewarm reaction to the whole idea, and running bud Varsha could start me off.In an enthusiastic demonstration of support, I think hubby’s first words were ‘that doesn’t mean we all have to come to London as well does it?’

So guess what, more reasons for than against……Fuck it, I’m doing it !!

Like there ever was a possibility I wouldn’t! I promise to blog warts and all about the realities of getting there. I found out via email at Prague airport. Honestly I was in a check in queue and the smile on my face was so huge the people around me must have wondered what on earth could be so amazing. Reality is sinking in, but the smile hasn’t gone.