I’m nothing but persistent and I hate to fail a goal I set for myself. This year has been good, I’ve had a PB at every distance and I badly wanted a sub 2 hour half marathon. I was so disappointed last year to follow the 2 hour pacer for 8 miles and then suffer such hip pain I had to back off the pace and ended up coming in at 2.03. So near, yet so far is really galling. So this time, with  my piriformis issues ( as I now know they were ) sorted and my pace much improved….thanks Holme Pierrepont Running Club and the genuine worry that at my age it could be my LCA peak, I REALLY wanted a sub 2 hour half marathon and it seemed everyone else I talked to had managed it !

This was my third Robin Hood Half Marathon, the third any half marathon actually, so as you can see, I’m not quite a ‘destination’ runner as yet. Three half marathons that start and finish a couple of miles from your front door isn’t really pushing the ‘racing the world’ ideology that I do genuinely like the sound of and read a lot about. This year though, me and Ellie’s husband had finally talked her into entering. Well actually Mick had entered her as a birthday gift on my assurance it wouldn’t lead to the divorce court. Now that was a calculated risk I took! Ellie always needs a push and I’m always the friend that’s happy to oblige (watch out Varsha,Santa might brig you race entry!) 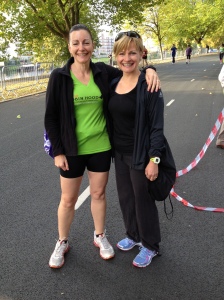 I’m wearing a gel belt…OK that’s not my fat belly !

Ellie and I had trained to 11 miles ( and often pull 10 ) so we both knew she’d be fine. We agreed not to run together, I needed to selfishly focus and if I didn’t run under 2, I wanted no on else to blame but myself.

We arrived together, with team Squitieri in tow, despite being teenagers, my daughters know not to argue about coming to support me at this race, this year so far I’ve been on my own for all the other races! I eagerly went to see if some of my new ‘Notts Women Runner pals’ were at an agreed meet point as half the group that is growing rapidly by the day seemed to be running. A few were there, including Sara who I’d run with a few weeks earlier and I think I’d missed a few more who’s proud snaps we’ve all admired on Facebook .The power of social media to bring like minded people together is amazing even though not all are ‘of a certain age!’

So what would be my race review?

There were more starting pens than in previous years and a staggered start which they’ve never done before. Each year I’ve moved up a pen so I guess that’s a good sign. The ‘rabble’ seem a long way back. I had put 2 hours as my estimated finish time which meant I had a blue number…..hhhhhmmmmm but really I wanted sub 2 and the lady runners I now know (friends, rivals and LCAs) that also wanted sub 2 and whom I consider of similar ability all had red numbers …..the pen ahead of me, what a dilemma. There was nothing for it, with my arms casually folded over my blue number, I slipped into the red pen despite their entrances being ‘policed’ by marshals. Mentally, I couldn’t face them racing off ahead of me .Of course then I’m panicking if such a move disqualifies me or what if I’m left behind before we’ve even left the embankment? Too late, the officious marshal shouts at us to move up the pen so I’m trapped in it now. Nearly time for the off and that final thought of every runner at this point hits me ….’I need a wee’ !! mind over bladder, all fine really. I pass a few words with the guy next to me, always calming and then we’re off. Team Squitieri cheer me off, I have no idea where Ellie is, in the rabble pen I think.

The crowd is thick once you’re under the inflatable archway, Garmin started and I’m running with the red throng, I still have time to scan the crowd, it’s local so I always hope I’ll recognise someone I know, or someone will unexpectedly shout my name. It’s the first time I didn’t wear a shirt with my name on, recommended to me for my first half marathon by Nadia, my inspiration for running. It worked a treat, lots of people shouted encouragement and you don’t half need it at times. I had planned to wear a Holme Pierrepont vest and finally be brave enough to ‘run for them’ as I’ve been affiliated to them for 5 races now. Who’d have guessed they’d be out of stock. I gave up and wore the race T-shirt.

So we rushed out and up London road, ironically, the start of my daily commute. I love running down the middle of a road I drive on daily. I even ran through the red lights (will I get points on my licence for such a traffic offence?) I had decided in advance I needed to stay at 8.5 minute miles, allowing an odd slow to 9 minute miles if I needed it, to get the sub 2 hour time I wanted. At mile 1, me and the red crew were at 8.2 and I didn’t feel pushed, all good. We pushed on towards the city centre, lots of crowd support and all good. Out along Queen’s drive towards the ring road, such a busy stretch usually , I love running along it. There’s an odd ‘dog leg’ in the course down ‘Electric Avenue’ …..(yes really) to the first water stop. Now I planned just to drink at the 6 mile mark but the sun had popped out and I was truly annoyed I forgot my running shades (I look quite a pro in them) but I thought a quick swig would be nice. Gone is the hazard of tripping on hundreds of discarded plastic bottles and in their place are weird water pouches that ‘splat’ when you throw them down. You need to squeeze the water out of a spout which I did …..straight up my nose, trust me, coughing and choking is not good for the breathing rhythm.

Onward we ran to the Boots campus and that’s where it gets quiet, no crowds, no music, no workers, its a horrible part of the route. Amusing are the number of chaps who pop over to the bushes in front of the customer service building for a wee and even funnier and something I haven’t seen before was 3 ladies going into a hole in the bushes which acted as self contained toilet cubicle. Nice one ladies, you know who you are….lets hope Boots CCTV doesn’t! The crowds resume once we’re offsite and we head for the university campus. There’s more water and time for my gel. I have perfected the art of biting off the top and having it on the run. I know there’s debate whether it’s necessary if you plan to be running less than 2 hours, but it was warmer than I thought and my calves do cramp more beyond 10 miles so placebo or not, I kept to my 45 minute gel plan.

The course is described as ‘fast and flat’ but there’s a gentle climb up to the iconic Portland Building of the university , through the courtyard in the middle where the sounds of hundreds of pounding feet echo off the walls and out to meet local radio station Gem 106, at last some thumping music. I’m sure the organisers described music as part of race but there really wasn’t much at all and it does make a difference. I remember steel bands and much more on my first Robin Hood, 4 years ago. I can certainly see the appeal of a Rock and roll event.

I love the crowd who get into it, thanks to the young man and his ‘Free Hi 5’s’ sign and the students with their huge ‘Press here for power’ sign. Previously team Squitieri has reappeared at the university park for a second cheer on. But alas I recognised or heard no one. Running under the Dunkirk flyover once again is amusing and then up Abbey Bridge (excuse me, fast and FLAT ??) It’s at times like this I realise just how long Castle Boulevard is and I felt my pace slowing but checking Mr, Garmin, I actually only slowed to 8.4……..looking good. It’s turning back towards the Meadows when it starts to get hard, thank god for a race savvy marshal who encouraged us with, ‘Good Pace, keep going you’re on for sub 2’…..that’s all I needed.

Distraction time now needed, my mantra for the day  ‘Run it like a boss, Squitieri’…..I don’t even know what that means when I said it to myself ? The lady in front of me had fabulous brown legs, I noted a very large spectator ‘get yourself out here next year love, I’m thinking’, I spotted another LCA in a crop top, fabulous pace but big muffin top, are there no mirrors in her house ? Thoughts and more thoughts, the Embankment is in sight. Now the killer part. Your brain says , ‘Embankment, I’ve done it’…..the sign says 11 miles, so no you haven’t! The Embankment is a mile long between bridges and you need to run it and double back to the finish. At that point I see and hear Ellie’s mum and Mick call out, yeah support. This is the hardest part, the biggest crowds and unusually for me, sore feet despite my double layer socks. I know I am tracking for a sub 2, but what if I slow down, I pass a few runners now walking ( why when you’re so close, on such a good time?) Helen, a lady I haven’t seen in years shouts out, yeah support. I turn , mile 12, this is it, can I pace up ? Can I hunt down some bibs. I  think I spot a Notts Womens Runner a way ahead, come on chase the bib down. Unbelievably the tanks aren’t empty, I have it left, I power up. The final turn is across the grass, I can manage a fast finish. I can’t see anyone in the crowd aaarrrggghhh where’s my supporters? Then I hear team Squitieri….I can do it, I’m round that final bend and attacking that line. 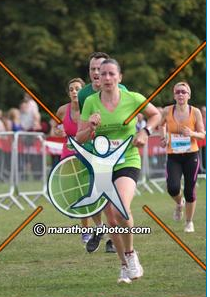 I collect my medal and a woefully pathetic goody bag and spot Team DiCosmo. Friends who’ve never missed a Rushcliffe 10km or a half. They always see me off and  I missed them this time at the start although I know they came (sneaking into a different pen probably caused that). How lovely, that they came back. I rushed (well actually ambled whilst rapidly stiffening) back to the course to wait for Ellie. What a result, 2.08 for her on a first attempt 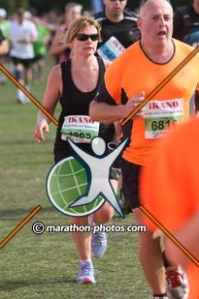 Here she comes, a great first shot by Ellie

My main thoughts now are; ‘How the hell will I ever manage a marathon, when that just nearly killed me?’ Ellie and I are signed up to the local Turkey Trot Half Marathon in December and we’re doing it together, no time pressure, lots of talking. It’s described as ‘undulating’ so I’m guessing that means ‘Hilly as F–k!’ So it’s now all about distance, not speed , but I did it, sub 2………there’s hope for this LCA yet. 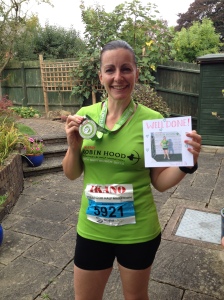