So I can’t say I wasn’t a touch worried about the final two races in the Holme Pierrepoint Grand Prix. Race 3 was the shortest and my most feared, the 5km. Ironically, it was always going to be a PB. I have never run a competitive 5km, never risked a Park Run, just me and Mr. Garmin working out a quick ’round the block’ 5km from  my front door and back for when training time is tight. The venue for race 3 is however my favourite, Wollaton Park, lovely grounds of the Tudor mansion, Wollaton Hall or ‘Wayne Manor’  for all fans of the latest batman movie! The evening was sunny, but not too warm, the park busy with non runners clearly intrigued by all the colourful ‘weirdos’ in compression socks. I should point out that as yet, we three LCAs have not been persuaded by any scientific benefits of compressions socks at this point in time. We’re still at the ‘what’s the point’ phase! Slightly concerning was Wollaton’s deer herd who had unusually opted to sit in the centre of the park at the front of the hall and not in the seclusion of the rear grounds they usually favour. This put them at the centre of the action, runners passing them on both sides….clearly it was too warm for a stampede, they merely feigned disinterest at the proceedings.

The deer at the heart of it all

I braved all and finally used my Garmin to follow a pace. I’ve only owned it about 3 years !! What do you know, just three sessions out with a running club and I’m using it properly. That in itself is probably worth the £26 annual fee. I went for 8 minute miles, just under if I could. The course was a bit hilly but nothing that stopped my pace, I was quite proud of that, there were a lot of walkers at that point. I should point out that Ellie and Susie were looking forward to the shorter distance but the gem of photo below by the race photographer has made us all laugh and is a lesson never to underestimate the older runner!

Hills are no issue, keep that pace !

It almost felt too good to be true, that the finish could be half way DOWN the steepest hill, I daren’t hope for such a thing , I figured it would probably be down to the bottom and back up again. Imagine my surprise, when it was indeed a total  gallop down the hill to the finish and for me a time of 24.27…..that will do for a starting PB. Maybe I should contemplate Park Run?

So, final race, Holme Pierrepoint 10km and this time I was on a mission for a PB. It was quite a dreary evening but not hot and it was the biggest turnout at over 300 runners. Add to that our support team had turned out for our final exertions. I settled in with a group of HPP runners, sorry guys, I should have had a vest! I was spurred on by my new running bud Katie, who gets such a lot of support on route (jealous.com) I wasn’t sure if I hold 8 minute miles at the longer distance, but hey, I can!

Sorry fellow HPP guys, I need a vest…..I don’t make it look easy do I!

The last 2km were merciless, straight into the headwind around the lake that blows no matter what the weather. I was chasing a PB of 51.40 earned last year on a flat course on a sunny day. The familiar faces at the finish certainly focus the mind when you feel done in, I got it, 50.28……what could I have done without a headwind? It was a great finish to a gruelling event, I think I’m glad that I can’t run it next year and am ‘expected’ to marshal. Who’d have thought 4 relatively short races in 2 weeks could be so tiring, I know I wasn’t the only one fatigued by it all. When I think Susie has never competed before, she deserves huge respect for pulling off such an achievement. Not only that, but having only pulled off a couple of ‘natter runs’ at 10km distance, she came in under an hour on Race 4, that’s some going!

All that for a tee shirt and my what a tee shirt, its pea green, it has the weirdest design, it isn’t a ladies fit and small is enormous. Still it was bloody hard to earn it, so I will wear it with pride! I can push myself, I can run a much better pace than I think, I know can do more…but it was bloody tough finding all that out. 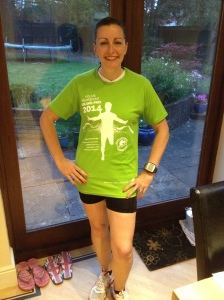