Feeling Brave – ran with a club

OK so I’ve toyed with the idea of going out with a running club for ages. I keep reading evangelical stories in my running magazine and I need to change up my Monday night routine now the summer evenings are coming. Ellie and I agreed we might try the local running club, but somehow a natter and our usual route always seem more appealing. So when Ellie had to be elsewhere (we’ve four active teenagers between us so as chief chauffeurs we frequently have to be elsewhere! ) and the weather encouraged  springlike enthusiasm, I though ‘now or never’ just go, how bad can it be?

They weren’t hard to find…..just follow the Lycra. They were very friendly and bizarrely only talked in miles when my running is done in kilometres. I guessed my pace was 9 minute miles which didn’t put me in the slowest group. It certainly wasn’t a place of youngsters, there was many an LCA, all looking good of course…..in fact many MCA’s too (Men of a Certain Age, never used that before). Most importantly the fellow LCAs were all not too thin or gorgeous,  just  honed by running as expected. In my locality, home of the lady that does lunch, but not too often , usually after a gym visit and always carb free, LCA competition can be tough. One glamorous young thing appeared, sweaty and breathless like she’d ran 10 miles to get there (probably had!) I didn’t see which group she left with or see her come back. She must have got home and got the dinner on by time us old dears got back.

The route was glorious, down lanes, across fields, along the canal and across the A52 dual carriageway…..but hey, I’m always up for death defying activity. Parts of the route I’d run with Ellie before, some were just pleasurable discoveries in my own locality that I hope I can remember to show Ellie without getting us lost. Still, I owe her a tortuous run after she planned a route on Saturday that was supposed to be about 12km which turned out to be 15km.

Although around 40 runners showed up to run, after keeping together for a short time the different paced groups went separate ways as each leader had a route and pace in mind, all doing around 5 miles. I felt the pace kick in on my chosen group, it certainly wasn’t the easy chatting pace I’ve trained at recently and my nominated partner who kindly offered to run with me noted we were under 8 minute miling. I was caught in between the pace of the group leads and my partner who had nudged back a bit (she had run the London marathon 3 weeks ago with an injury) so I was a bit ‘billy no mates’ in the middle. We were back at the gloriously located National Watersports Centre in 50 minutes after 5 miles (9km), not bad.

Would I go again, yes, it would do me and Ellie good just to keep that pressure on a little and stop us getting too lazy. It’s not a beginners club, but I think familiarity with a few faces would make the runs even more enjoyable…..so what are the joining arrangements ? 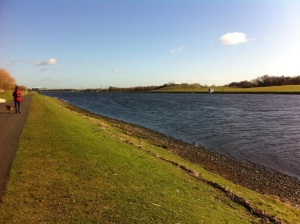