Home › Ladies of a Certain Age Running (LCA) › Where you been fatso?

Where you been fatso?

…..is I’m sure a thought from anyone following my blog that I promised myself I’d write once a week. In a rather unexpectedly hectic period where an urgent and manic DIY frenzy (the perils of my ‘landlords’ hat) was required that led into a fantastic and what felt like well-earned holiday. Running, the gym and blogging took a back seat.

I briefly discovered an old love that’s not been in my life for a couple of years now; beer. Me and beer used to get on well, we enjoyed each others company on hot days, shared BBQs, we relaxed after work and shared Friday night curries together. Sadly even before I discovered running and the meteoric change that can make to your body shape, I had to acknowledge that beer and my waistline weren’t compatible and I ended our relationship.

My holiday started in the stunning city of Prague, it was hot, it was beautiful, it was better than I ever imagined and of course it is the home of Pilsner, who wouldn’t rekindle a holiday romance with beer given the stunning surroundings and the rather inexpensive price of this local delicacy! Here we are together….

My first holiday beer, I’d missed how good it could be!

Beer in stunning surroundings, who wouldn’t ?

Sadly to go with the beer is Czech food. It’s heavy, it’s meaty and it’s filling. It’s amazing that the young Czech women are generally super model tall and slim…..I’m not sure at what age they transform into the build of eastern European shot putters, but it happens at some point. The specialities are delicious, goulash with bread dumplings, soup served in a bread bowl. I had decided that my 10 days away should be run free. I felt a break would be good and set me up ready for intense half marathon training when I got back. Alas, although on returning to our hotel each day, my feet were ‘shouting’ ,I know the calories in v calories out equation was balanced towards an expanding waistline. Unusually I saw hardly anyone running in Prague, two people to be very specific….it seemed odd for such a major European city, with a communist history of sports excellence. 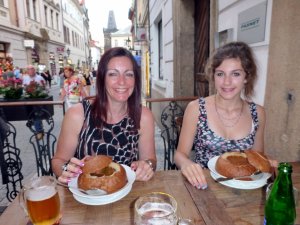 Heavy meat soup in a bread bowl. Just eat your crockery…I love it!

Meat goulash with bread dumplings – made from soaked stale bread as we found out later. Still yummy though.

The trip continued in culinary relaxation to stunning Split and Dubrovnik in Croatia. Excess continued with champagne for breakfast and every delight taken on a terrace with a sea view to die for. I saved my copy of Women’s Running Magazine though for my holiday reading. My family know that as far as running goes, if I’m not doing it I like to be talking or reading about it!

Running – if I’m not doing it, I need to be talking or reading about it!

I’d also loaded my Kindle with ‘The Ghost Runner’ and was truly inspired by the tragic tale of Marathon and Ultra runner John Tarrant and his monumental struggle against the more archaic British sporting traditions that simply took too long to overcome. It’s a great ‘running’ book, I love the thought of blokes doing a week of a heavy manual job, running a marathon at the weekend in a pretty impressive time and then stopping at the pub for a few pints after. If you want a funny and inspiring read despite its sad outcome, I’d really recommend it……

So I’ve arrived back to jump into week 5 of a 6 week half marathon PB training plan that I downloaded. Sadly 4.5kg ahead of my ideal running weight, that’s nearly 10lb I’d prefer to be without. I can’t blame the holiday completely, my eye has been off the ball for a few weeks. I gamely took part in a work organised Man v Food challenge organised by local restaurant Lola Lo’s. I baulk at the TV programme and its dreadful promotion of excess when half the world starves and the other is becoming more obese by the minute but I promised my team I’d join in our next night out. I opted for a ‘Beast Burrito’ and it was a monster. The thought of actually eating it all and the fries and side salad in 30 mins was never happening but never one with a small appetite I put in a valiant effort  and saw off almost half of it and all the fries. My left overs gave both daughters a lunch they could barely finish next day ( I tried to minimise the waste!) Check it out below, your eyes do not deceive you! 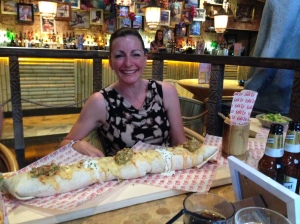 Woman v Food at Lola Lo’s in Derby….it beat me

So I’m back with you blog readers…I’ll be blogging, running and training much more and eating much less. That’s actually the way I prefer it. You can have too much of  a good thing but then that’s what holidays are for, aren’t they ?

Like Loading...
‹ The hot green gherkin
Torrential rain, nose bleeds and a DCA (Dog of a Certain Age!) ›