This girl has now been launched as an official community ambassador for the ‘This Girl Can Campaign’ …yes really; ‘girl’ I know what your thinking, I’m firmly in the LCA territory, but apparently as I still have ‘girls’ nights out and ‘girls’ nights in and often invite the ‘girls’ round and despite the fact the campaign clearly has a focus on the 14 – 40 target group, I still have some ‘skin in the game’….even if it’s wrinkly!

How do I know I’m in the LCA category and in case you’re not sure, here’s some pointers….

Ladies if you agree with 5 or more of these things, come and join my LCA club!

Realistically I hope my ambassador opportunity has come along because of my passion for sport, for running, for wanting to motivate other women, for being driven to exasperation by the lack of confidence so many amazing women have that I have never understood. And maybe it’s my desire to get every female backside, large or small off that sofa more often and share the feeling of being fit and strong which is an indescribably positive feeling that enhances your life if you are prepared to put some effort into getting there.

The ambassador reception was a motivating affair at Antenna Nottingham, I’ve had years of rocking up to events alone and confidently attacking the ‘small talk’ so that wasn’t a stress, even though it’s a new venue for me. Posing for a photo when others are looking …… Now that’s quite stressful! Joining my allocated table which had two of the youngest ladies there was tougher. Talking to the equivalent of their mum probably wasn’t what they had in mind. I’m sure they didn’t mean any harm with their opening line ‘ I thought it was going to be all young people?’

The ‘smart casual’ dress code was a licence to do whatever. Me, dress and heels, as I came straight from work ( touch too smart) girls in football kit, straight from training ( touch too casual ) and every outfit option inbetween, even Lycra!

It was lovely to meet Olympic swimming bronze medal winner, Jo Jackson, a rather overshadowed name due to the national fame of the gold medal winner in the same race, Rebecca Adlington. Bizarrely, Jo has never watched her performance on TV. An Olympian who can’t watch the pinnacle moment of her career that we can only dream of, that we can only watch in awe. A girl that definitely can, a girl that should definitely relive that moment by watching it every day!

We signed our pledges, we talked social media, we shared inspiring stories and met inspiring people 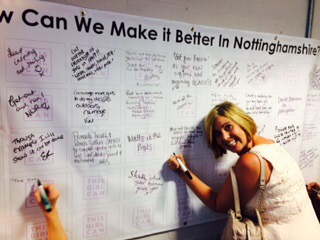 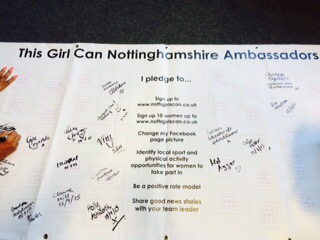 My focus is the LCA though, I care not if it pushes the boundaries of the campaign. I’ve been sport mad since school and although my exercise levels and weight have risen and fallen over the years, sport has been there to a greater or lesser extent. I played hockey and tennis for school, earned my uni ‘Blues’ as a heavyweight karate fighter in the British Student Games, spent my 20s teaching and competing at karate with a weight training sideline. Spent my 30s having my beautiful family with the odd foray to the gym or an aerobics class and my 40s is surprisingly the best decade yet. Karate was still part of it until I broke my hand 18months ago and couldn’t drive which I need to do for work. Time to retire! Can you imagine as polite 45 year old, sitting in the ‘hand clinic’ in a business suit in a line of ‘thugs’ who had the same ‘fighters fracture’ as it’s known.

Age 40 was the start of my running love affair which hasn’t yet ended, it’s given me new goals I never thought possible. 10km is now just a normal training run, a half marathon isn’t too daunting, I’ve done 5 and this year’s London Marathon,wasn’t fast, but it was awesome. I’m 47 and fitter, faster and thinner than I’ve ever been.

So many of my friends seem lost, our teenagers need us less although they are no less of a worry. Ageing parents need us more and I’ve heard us called a ‘sandwich generation’ having dependents either side of our generation. Babies and toddlers are great worries and a source of much joy and much stress. I think the primary school years are the halcyon days of childhood before the teenage years bring new sources of much joy and much stress. Exercise is the ultimate coping mechanism. No matter how much you didn’t want to do something physical, I never heard anyone say they didn’t feel so much better afterwards . We’re in our 40s, we don’t know what’s round the corner but we can still take up a new sport, set a new challenge, resume our careers, whatever we want ……we’re not waiting for retirement, that will be boring enough when we get there. I know some of my friends dislike their jobs, hate their bodies and fear the ’empty nest’ to come, I dread it too but there’s so much on my list still to do life can have a new focus.

So look out for my new Facebook Page to promote all sorts of sports in Nottingham. Challenge me to have a go at something and I’ll blog about it ! Watch out this autumn as I’ll be taking my first outing as the newest Leader in Running Fitness on the block offering some Couch to 5km action for the ladies of West Bridgford.

Sometimes my life is so crazy I have no idea why I say yes to things, I have no time whatsoever to be an ambassador. But then I’ve heard it said “if you want to get something done, ask a busy person” so……

Tags: Notts Girls Can, This girl Can, This Girl Can Ambassador